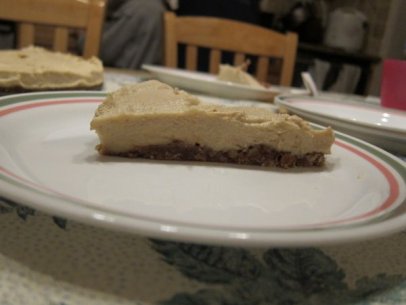 Confession: I think I am a failure when it comes to baking. I burn cookies. I don’t keep cakes in the oven long enough. Pastries fall apart. Things that are supposed to be firm are simply goop. So I was pretty excited when I heard about raw cheesecake – not necessarily because it’s vegan, but because it is a no-bake dessert. I first had raw cheesecake when I went to the Chicago Diner while Christie was in town. I was blown away by how creamy and tasty it was and then even more blown away knowing that it was a raw food. I always thought, “hmm, I should try making some raw cheesecake,” but it wasn’t until I started this blog that I had the motivation to do so.

I visited what seems like several web sites to come up with my own raw cheesecake recipe. Here are the ingredients I used for Raw Cheesecake Experiment #1. Make sure you read this entire post as there are certain things I will definitely change about the ingredients/measurements the next time I make this.

Before you do anything, measure out the cashews and soak them in water. I soaked them for one hour. Longer than that is probably much better. Some sites say to do it overnight, others didn’t mention soaking them at all. When I make raw cheesecake #2, I think I will try to soak them for 3-4 hours. Another to-do before you begin is to take your jar of coconut oil and stick it in a bowl of hot water so that it’s melted by the time you need it.

Start by making the crust. Soften the dates first by steaming them for a few minutes, and then remove the seeds if needed. Then, combine the almonds and dates using a food processor. Now, I adore my mini food processor. It has never let me down. Then again, I have never jammed almonds and sticky dates into it. I’m still not sure what the most efficient method is for combining these without wanting to give up, but I eventually ended up with a good result. More confession time: I used almonds because I saw one recipe that used them and I already had them. Next time, I’m going with pecans or walnuts.

The mixture should be tasty and a bit sticky. Get your favorite cheesecake pan (8″ is ideal, the pan I used was too big). Take the crust mixture and press it down into the pan. Try to make it as smooth and uniform in height as possible. I like using the bottom of a measuring cup to help with that sort of thing.

Now, grab the rest of your ingredients and mix them together in a blender, using the water as needed. A lot of the recipes I saw called for a 1:1:1 ratio for the lemon juice, coconut oil, and agave nectar. Next time, I am cutting down on the lemon juice as my cheesecake came out a bit tart for my taste (my brother said it was more like ‘key lime pie’ instead of ‘cheese’cake). You should end up with a thick mixture that you can easily pour and smooth into the pan over your crust. Put the cheesecake in the fridge or freezer to set for at least one hour.

This cheesecake was kid-approved! It tasted great plain, but I also tried it with some chocolate syrup and topped with pomegranate seeds. I imagine it would be great with the cherry topping that Christie made for her ‘cheese’cake.

I wish I had pictures of the other steps in the process, but my hands were really sticky from the dates and I was cursing in the kitchen from how challenging this recipe ended up being, so I wasn’t exactly in the picture-taking mood. At any rate, this was a great learning experience for me, and I’m eager to try again and make it more interesting: add cinnamon, fruit, cocoa to the filling… if you have ramekins, you can easily make individual cheesecakes if you’re having a dinner party or just want to be fancy.

Raw cheesecake is a great dessert. It’s healthy, and no animals had to die in order for me to make it. Plus, it’s soy- and gluten-free in addition to being vegan. If you’re in Chicago and not up for making your own, definitely check it out at The Chicago Diner.