I had a giant glass of carrot, lemon, kale and ginger juice and decided to use the pulp to make a quiche. Why the eff not… right? Recently LuminousVegans and FormerFishTacoFanatic had an incredible brunch featuring a vegan quiche (check it out for other idea and recipes) and I just haven’t been able to get it out of my mind.

I mixed the pulp with a generous heap of flax meal, 2 tablespoons of tahini, and a pinch of salt.

I mixed it together until it got doughy and then mixed in a generous pinch of baking soda. I mooshed it into a olive oil coated pie dish and baked it at 350F/175C for 15 minutes. It might take longer to cook depending on how thick it is. Test it to be sure it’s starting to get firm and a little crisp before you take it out. You can also use your own favorite crust recipe.

While that was happening, I sliced up some mushrooms, broccoli and tomato and sauteed them lightly and poured off the liquid. I was worried the crust might get soggy from the mushroom and tomato juice.

I put the veggies and some vegan cheddar into the pie crust and then mixed them with a tofu scramble recipe from this is my everest , I just put “egg” part into my food processor with a carton of Mori Nu soft silken tofu and a tablespoon of starch and blended it until smooth. I baked it for another 40 minutes. Cover the edges with foil if you’re worried about them burning.

I let it sit for a little while to cool… I was really worried it would fall apart when I tried to serve it. I was also worried that it might not be as delicious as the tofu scramble by itself and I would have to scrap this post and draw a picture of a giraffe instead to assuage my grief. 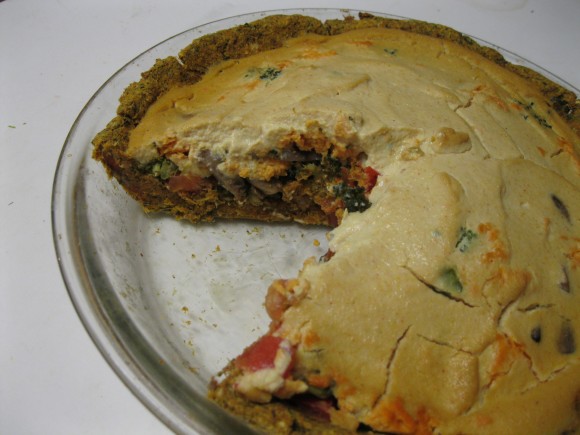 Not to worry, my intrepid adventurers! The crust did get a little soft in the very middle… Next time I do this I’ll probably use less gooey veggies than fresh tomato… maybe sun dried tomato. I had to take this picture before I accidentally ate the whole thing. You might notice that it’s mostly vegetables with a little tofu scramble on top… bad habit. I think more tofu scramble would have made this more quiche-like but I dig veggies. What can I say.

4 thoughts on “I love food with funny names… like quiche.”