Easy Enchilada Casserole is on a ROLL!

This is an easy thrown-together, fun to play around with variations on favorite in the Alldestroyers household. It’s basically decadent layers of cheese, beans, tomatoes, peppers and whatever else your heart desires baked up to bubbly perfection. Brent and I decided to start with 2 different kinds of beans: black and kidney.

We decided to make this a 2 layer casserole: cilantro lime black beans and soysausage chipotle red beans. It was that simple.

In the glass baking dish we made 2 layers of tortillas with a layer of Daiya in between to make serving easier. 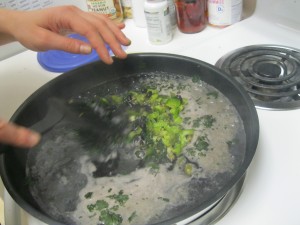 We cooked the 1 cup of black beans (soaked overnight in 3 cups of water, we kept the water for this step) adding 1 minced jalapeño, juice from 1 lime, a splash of tequila and a handful of cilantro leaves. 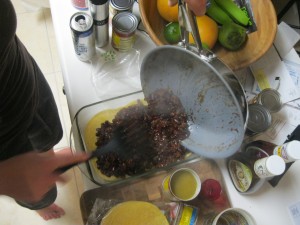 The red beans got a similar treatment with a can of chipotle peppers in adobo sauce, a minced soysausage and that’s all she wrote. She being me, I’ll let you in on a secret… I’m going to write some more. We simmered the beans until they were mostly dry and then it was time. 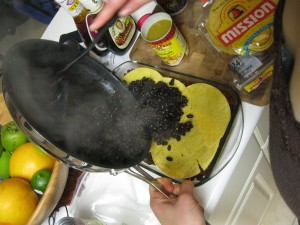 We assembled the casserole by pouring the beans into the first layer of tortillas, pouring some enchilada sauce over it. You can make your own or buy it. We were feeling lazy after being all industrious with the beans so we bought cans of sauce. We poured the next layer of beans, the rest of the sauce and smothered it with more Daiya. 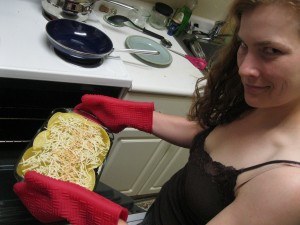 Thirty minutes and 350C/180F later the saucy adultery of the casserole began.

This is a great family friendly meal. We hope you get to try it and love it as much as we do… and the leftovers. I love leftovers.

2 thoughts on “Easy Enchilada Casserole is on a ROLL!”