We took a short trip to Nicaragua to visit an old friend and enjoy some sun and surf over the last weekend. I usually travel with snacks because you never know what kind of restaurant you’ll end up at but this is a whole different ball of wax. We managed to eat vegan and eat well the whole time we were there but there was certainly some difficulty. I’m pretty happy about the outcome.

Nicaragua is not a rich nation by any standard. The water isn’t safe to drink. The toilets won’t process paper. The power is more likely to go out than not. This being the status quo, the locals were surprised that someone would turn down good food of any sort. This highlights that being vegan or vegetarian is a choice and one that I’m lucky and grateful to have. 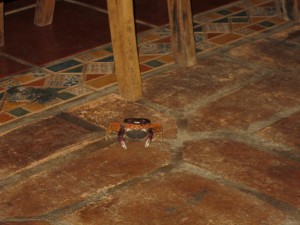 Beer is usually vegan but some varieties are filtered with isinglass, otherwise known as fish bladders. I’m a big fan of Corona. My gluten sensitivity is (fortunately) limited to wheat and typically not wheat hybrids. This being the case, most beer doesn’t bother me though I do drink it sparingly and avoid hybrids like rye and barley in food. If you’re curious I recommend checking Barnivore’s website for your favorite alcoholic beverage. The local rum, Flor de Caña, is both delicious and vegan so that was on the menu.

Fortunately, lentils are readily available and delicious along with the local rum. Brent and I concocted a hearty and spicy lentil chili, curried chickpeas, split red lentil soup, and a gigantic shepherdless pie (above). Each dish was enough to satisfy several hungry surfers and compliment the local rum. We cooked on a propane powered double burner and used whatever tools and spices were lying around. It was definitely a challenge but now I don’t have an excuse for not eating vegan when I’m traveling and have access to a kitchen. I find when I’m faced with the option of eating something non-vegan, it really comes down to whether or not it will taste good enough to keep me from feeling guilty later. The answer is (up to this point) “No,” but I also don’t always know what I’m missing (like raw fish versus the avocado nigiri and veggie roll, pictured below). 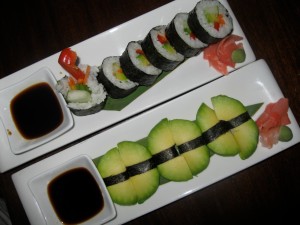 This is probably a good follow up to Melissa’s post about the leniency we allow ourselves in matters of dietary restriction. I would sum it up in an anecdote. My Dad once asked me if he’d live longer if he eliminated cholesterol from his diet completely. I told him, “I don’t know about that, but it’ll certainly seem longer.” Do what works for you, use your own conscience, and don’t forget to enjoy your life. That’s the most important thing as far as I’m concerned.