I’ve had two experiences with kumquats. The first was in a French restaurant. The kumquats were on a stick and coated in syrup. They were a sweet delight and totally different from anything I had tasted before. Until I was told they were kumquats, I thought they were some sort of mini orange-cherry hybrid. My second experience was with a raw kumquat. Ew. I was disturbed. Let’s leave it at that. 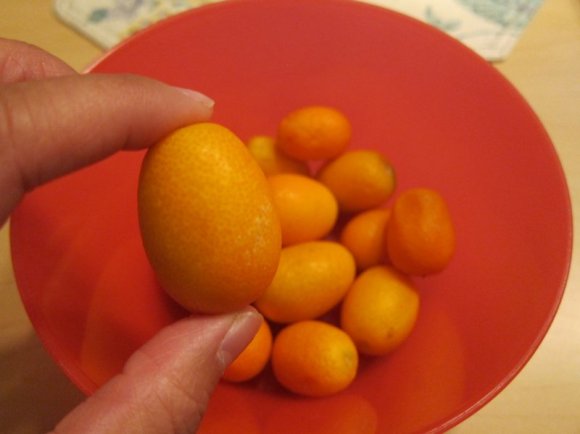 I saw some kumquats at the store so I thought I would try them again. I didn’t try eating them raw. I decided to candy some of them.

Candied Kumquats
15 or so kumquats, quartered and pitted — I saw some recipes where the pits were left in, but the seeds are bitter so I would take them out
3/4 cup water
1/2 cup sugar (I used turbinado)
vanilla bean or a splash of vanilla extract (optional)

In a small pot, bring the water and sugar to a boil, stirring so that the sugar melts. Add the kumquats and vanilla. Bring back to a boil and then let it simmer for about 15 minutes. Let it cool. Here’s the finished product: 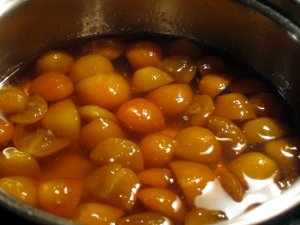 I’m still not entirely sure what to do with this. I put some in chia seed pudding. It’s an acquired taste, but it was good. There are savory uses for candied kumquats as well. All I know is that I can’t eat them raw.

I don’t know why I’m so desperate to love kumquats, but I am. I need ideas! Share, share!! –Melissa