My sister and I decided to have another one of our cooking challenges where we take a dish and make traditional and vegan versions of it. Our next dish was eggplant parmesan. I looked at several vegan recipes and decided that I was going to follow this one from Oh She Glows. It was a good plan until I botched a critical step (thus the ‘dummies’ part of the title). It doesn’t matter because I ended up with a great version of vegan eggplant parmesan anyway! 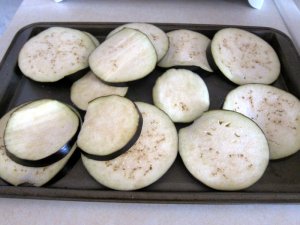 I cut my eggplant into 1cm slices and ended up with 14 slices. I then sprinkled some salt on the slices to draw out some of the water –I’m afraid I may have drawn out some of the flavor as well– and let it sit for about 30 minutes.

Okay, now here’s where I screwed things up. While the eggplant was chilling out, I was supposed to mix together the milk, flour, vinegar, and spices. Instead, I mixed all that and the bread crumbs. Um. Yeah. Dummy. Oh She Glows calls for the eggplant slices to be dipped in the batter and then coated with the bread crumbs. There was no turning back once I added the bread crumbs, but I will say that it all smelled very good and mixed together nicely.

I had to get over my mentally challenged moment and work with what I had (big thanks to my sis for calming me down). First, I preheated the oven to 450 degrees. Then, I grabbed a deep roasting pan, sprinkled the bottom with the bread crumb mixture, laid the eggplant on the crumbs, and then topped it off with the rest of the bread crumbs. I stuck it in the oven and let it bake for 20 minutes.

Meanwhile, I put a pot on the stove to cook pasta to go with the eggplant parmesan, cursing myself the entire time for being unable to follow a brilliant and simple recipe. I chose this spinach spaghetti from Shmole Broods. I tossed it in olive oil and freshly minced garlic. 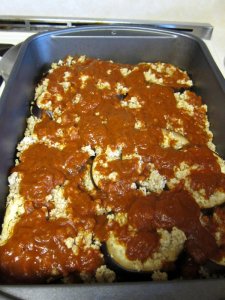 It tastes as good as it looks, and I hope it looks good to you. Wondering how the traditional version turned out? We didn’t make one — this version worked for everyone, including my Italian brother-in-law.

I can now say that I’m pleasantly happy with how this turned out. I undoubtedly would have found a way to screw up the breading of the eggplant, and I probably would have ended up with a lot of unused breadcrumbs. This worked out quite well and is how I plan to make this dish in the future. –Melissa

7 thoughts on “Eggplant Parmesan for Dummies”