I have tried a handful of vegan pancake recipes and they have all been disasters until I decided to try this 5 Minute Vegan Pancakes recipe. I first tried it about one or two months ago. They turned out so well that I really wanted to write about them, but I decided that I better try them again to make sure it wasn’t a fluke.

It wasn’t a fluke.

There is a minimal number of ingredients. In addition, both times I have used this recipe, I didn’t have to do the usual tossing of the first pancake. You know what I’m talking about.

I tweaked the recipe a bit today and used the following ingredients:

I mixed all the ingredients in a bowl… 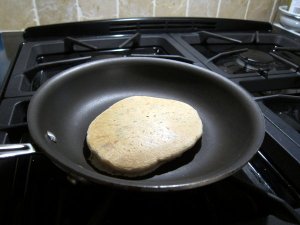 …and then I cooked the pancakes. That’s all there was to it.

Yay! Fluffy vegan pancakes! As you can see, I couldn’t even pause to take a photo before digging in. Actually, I ate the first pancake as soon as it came off the pan. That’s how delicious these are. They’re even better with some maple syrup and a side of tempeh strips.