My sister and I have started a cooking challenge of sorts. We take a dish and then, together, make two versions of it: vegan and non-vegan. It has solved two problems for us. First of all, she has three kids that keep her busy and so we aren’t able to spend as much time together anymore. Cooking is something that she has to do for her family and that we both enjoy doing, and it’s a fun way for us to hang out and be productive at home. Secondly, it solves the problem of having to accommodate my vegan diet. Last week, we made two versions of chili (we used Christie’s recipe for the vegan version) and two versions of sausage balls (vegan recipe will be posted pending further experimentation and satisfactory results). This week, we made chicken piccata and chickpea piccata. 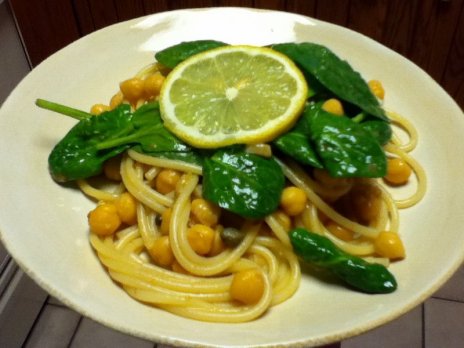 1 16oz can garbanzo beans, drained
1 sliced shallot
5 or 6 cloves of garlic, minced
1 tbsp breadcrumbs
2 cups vegetable broth (I used two packets of Swanson Vegetable Flavor Boost and 1 cup water)
1/3 cup dry white wine
1/4 cup capers
juice of half a lemon, save the other half for garnish or to spritz fresh lemon juice on the dish after plating
3-4 cups spinach
olive or safflower oil
salt and pepper 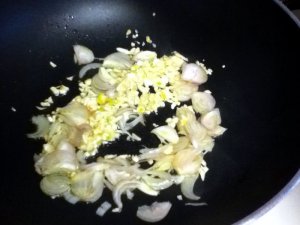 Heat up the oil in pan. Brown the shallots and garlic. Then, add the breadcrumbs and mix until the crumbs are toasty. 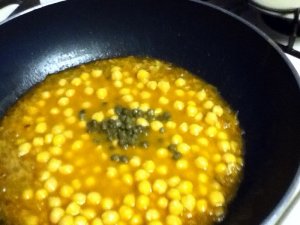 Add the broth, wine, salt, and pepper. Let it heat to a rapid boil until it’s reduced a bit. Then, add the chickpeas and capers. Once it is all heated through, add the lemon juice and remove from heat. Top it with the spinach, which should wilt nicely. Piccata dishes are great with pasta, mashed potatoes, probably even with rice. We used spaghetti. 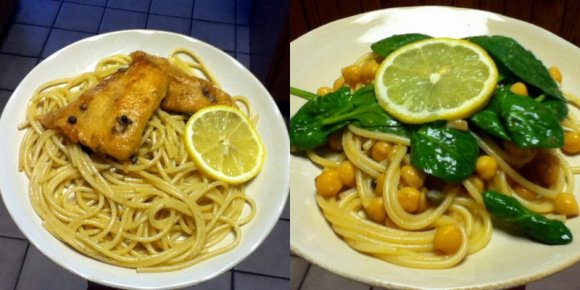 I tried a bit of my sister’s chicken piccata. Both dishes turned out tasty. I’ll go ahead and say that in my completely biased opinion, I liked mine better. Both recipes were easy and used ingredients that we are both likely to have on hand at any given time. The vegan version cooked more quickly, and it’s a plus that undercooked chickpeas aren’t potentially life-threatening. Bonus: no cholesterol in the vegan version. I think I will be making this recipe many times.

Cooking is always more fun and satisfying when you share it with someone you love! XOXO… Melissa