This holiday season hasn’t felt very holiday-ish. I definitely wasn’t feeling very festive until a couple of days ago. What happened? The weather got frigid, I walked into the State Street  Macy’s and got overwhelmed by the decor and the crowds, was given a candy cane by a bartender, and then listened to some Christmas carolers over by Cloud Gate. Yay! Christmas! All that’s missing is snow!

Now, whether or not you celebrate or care about Christmas, I’m willing to bet that you’re gathering with family or friends or, at the very least, getting inundated with baked goods by co-workers. It’s been a challenge for the past couple of weeks. I’ve given in to the cupcakes, the cheesecakes, the coffee cakes, the scrambled eggs. Today is Christmas Eve and it won’t get any easier — but I’ve planned ahead in order to avoid falling into traps. After all, there’s no excuse for me to break my vegan diet if I have perfectly delicious vegan food to eat instead.

I’m going to a gathering tonight and there will be plenty of food, none of which is vegan. So I made some pasta which I am calling Christmas Pasta! Next time, I’ll add spinach or some other green veggie so that it actually looks Christmas-y. 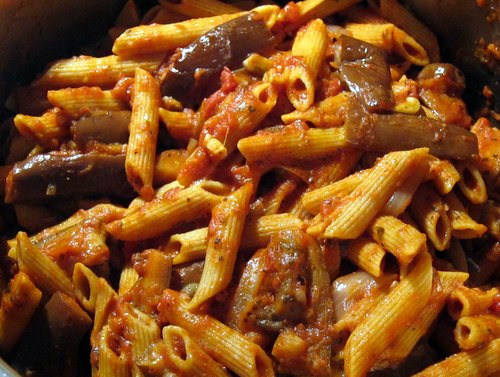 It’s still in draft mode until I serve it tonight. I hope everyone at the party tries it and likes it! It’s penne in a marinara sauce with lots of garlic, sliced onion, and eggplant. I’m pretty excited about it. Everyone else can have their turkey or beef or whatever!

Don’t forget to enter our giveaway!