Cuban can be vegan too!

Miami is immersed in Cuban culture. From the coffee to the art, Cuba’s heartbeat is felt in this city. We decided to honor our love for Cuban contributions (namely a colleague of mine who recently got his American citizenship!) by creating a Cuban inspired vegan meal; black beans, pork, rice and plantains are stereotypical in local cuisine.

For the black beans, all we did was drain a tin of black beans and combine with some roughly chopped peppers, onions and tomato. 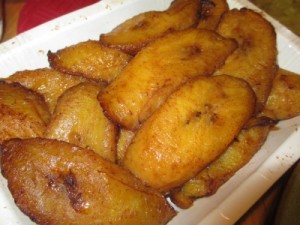 We made Vigo yellow rice.

Instead of pork, we had maple bacon tempeh. A traditional preparation of pork in Cuban cuisine might be topped with sauteed onions and cheddar cheese. We decided on the rest of those peppers instead. All of this was really easy. It took less than an hour to prepare everything and it was also delicious, nutritious and satisfying.

Thank-you to our neighbor to the South for the inspiration and a good friend who is finally official!

After working with plantains more often, I wanted to try a vegan shepherdless pie using ingredients popular in cuisine from our island neighbor to the South. Cuban food commonly has a lot of interesting vegan elements: plantains, yuca, beans, rice and bananas. I’m a big fan of those things so this dish made sense. This is what we started with for the mashed plantains:
8 plantains (8 fist sized potatoes would work too)
1/4 cup of Diaya cheese
1/2 cup of soy milk (any non-dairy milk will work, almond if you’ve got a soy allergy)
2 tbsp vegan margarine

I peeled the plantains and put them into water to boil. Plantains and potato have similar nutritional profiles except that plantains have a significant amount of vitamin A, where potato has none. They’re both starchy, provide vitamin C, and are free of fat and cholesterol. Getting back to business, while that was happening I prepared the filling with the following ingredients:
1 white onion, diced
1 jalapeño, minced
6 garlic cloves, minced
1 cup of black beans, soaked overnight or 1 can of beans, partially drained
1 can of diced tomato
10 okra, ends removed and sliced into 1/2 inch pieces
1/2 lb. frozen corn kernels
1 bunch of cilantro, chopped
1/2 tsp cumin
salt and chili powder to taste

I browned the onion, garlic and jalapeño along with the cumin until the onion became translucent. Then we added the okra, tomato, beans, corn and cilantro and stirred until everything was steamy and sticky from the okra.

Brent took the plantains and combined them with the milk, cheese and margarine and mashed them until they were gloriously creamy. They were really dry so you might need to add more soy milk depending on your plantains (or potatoes).Check out that radical dedicated mooshing face.

He also prepared a base layer in our baking dish of tortillas and daiya to aid in scooping but it’s not necessary. 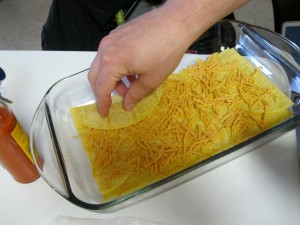 He spread the mashed plantains over the hot veggies and we put it into the oven for 20 minutes at 350C/175F until it was bubbly and delightful.

It was a hearty filling meal, loaded with vegetables and flavors. It made even better leftovers after everything had a night to marinade in it’s own juice.

Next time I might tweak the seasoning but overall it was a success. We ate half the tray and the rest is disappearing fast.

This is Brent and Christie, signing off.