If you’re in the United States, you may be aware that McRib is back at McDonald’s. Wait, don’t go anywhere! There is a vegan point to this post! I used to be one of the many who love the McRib. It’s tasty stuff! Tasty, nasty, unhealthy stuff! Now that it’s back and I see the ads and the signs or read tweets about it, I MUST FEED MY MCRIB CRAVING! VEGAN STYLE! 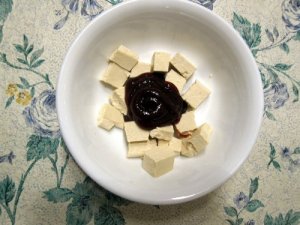 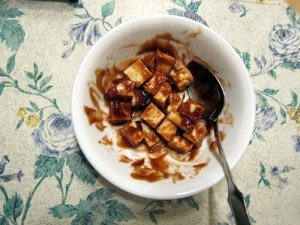 The Baked BBQ Tofu requires only two ingredients: 1 block of firm or extra firm tofu, cubed, and about 1/3 cup of your favorite barbecue sauce. Just mix it all together and let it sit for at least 10 minutes.

I baked the tofu in my toaster oven at 350 degrees for 10 minutes, turned the pieces over and coated with some more BBQ sauce, and then baked for another 7 minutes.

I made some red cabbage slaw to accompany the tofu. I mixed shredded red cabbage with 1 tbsp olive oil, 1 tbsp lime juice, about a tsp of balsamic vinegar, and seasoned with salt and pepper. I mixed it all up and let it sit in the fridge while the tofu was baking.

I ended up making BBQ tofu tacos since I had tortillas. I adorned the tofu with only some onion since McD’s only puts onions and pickles on the McRib. I would have added a pickle, too, but I think that would have been a little much with the slaw. The tacos and slaw were a great combination! I was worried that they wouldn’t mesh well but the flavors were great. I did add some more BBQ sauce to the tacos for extra flavor.

If you haven’t already, go here to enter our December giveaway. There are still two more chances to win a Bubble & Bee lotion stick as well as enter to win a TofuXpress. Yay! –Melissa

It’s still a holiday in the USA for the next three hours or so (at least in Chicago). I ended up having a laid back, no frills day. In terms of food, I celebrated with some soy curl barbecue which is so easy and fast and delicious!

Speaking of Labor Day and barbecue, I am pretty pleased with myself for surviving summer without eating meat. I have definitely been tempted at times: the aroma that wafts over from backyard barbecues still makes my mouth water. But I made it you guys! I’ve been turning veganese for over nine months now and it’s been… well, it’s been really great, and this blog is a huge part of why going vegan has been fun, exciting, and painless.

Happy Labor Day, wherever you are! –Melissa

Did you hear about our giveaway? Read this post for all the details and thanks for visiting Turning Veganese. You are awesome!

How This Vegan Did Memorial Day

Memorial Day in the United States is (or should be) a day of remembrance and a time when we should stop and thank those who have shown their bravery and made sacrifices to serve in the armed forces. Memorial Day in the United States is also a day of grilling… grilling meat. Lots and lots of meat. Hot dogs, pork chops, brats, ribs, steaks and are you ready to vomit yet?

I had a packed Saturday and Sunday with the nieces so today was a day of relaxation. It was hot out today, too hot to grill in my opinion, and it was just me and my parents anyway, so we didn’t do anything fancy. For lunch, I made some guacamole and some bean burgers.

I used Christie’s recipe for the burgers but minus the mushrooms. My mom and I went back to Jerry’s today, which is still one of the most annoying places on earth to go to, but we also got a crapload of stuff for less than $100. Seriously. If you are in the Chicago area, a trip to Jerry’s is worth whatever it takes to get there and be there. That said, all they had in terms of mushrooms were button mushrooms (packed or you could pick) and giant portabellas. I wasn’t quite feeling either of those.

Now, get ready to vomit again. I really miss the McRib. I know, I know!!! It’s so nasty. But, even after reading what actually goes into a McRib, I still found myself craving it. CRAVE NO MORE, MELISSA. Soy curls and BBQ sauce to the rescue! 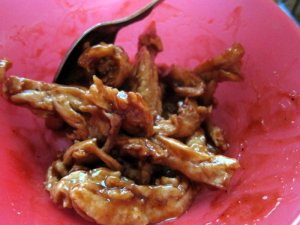 I soaked the soy curls and then covered them with some barbecue sauce. It’s as easy as that — the proportions you use are up to you. Unfortunately/fortunately, we had a bottle of Sweet Baby Ray’s which is the best BBQ sauce but is not totally vegan because of the brown sugar. I baked the soy curls in the toaster oven for 15 minutes at 325 degrees, turning over once, and then for another 5 minutes at 350 to get them a little crispy.

It looks dry, but I like having the BBQ flavor without having sauce dripping all over the place. This was tasty and just about one of the easiest soy curl recipes ever. I finished off the day with a slice of vegan chocolate cake and some blueberries and raspberries (not pictured on account of I ate it all).

Finding vegan ways to celebrate what are essentially food-centric holidays is a small victory. VICTORY! –Melissa

Butternut Squash Ribs or: How I Learned to Stop Hating and Love the Squash 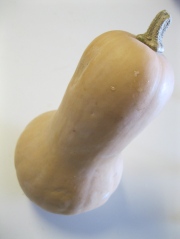 Before becoming vegan, I wasn’t a huge fan of gourds. I wasn’t a fan of the texture or the flavor of those I sampled. But as I say about tofu, I probably didn’t like it because it hadn’t been prepared properly.

The butternut squash we used for this culinary experiment sat in our veggie bowl for well over a week. I’d venture to say more than two, even. What I’m trying to say is it kept really well in spite of our best efforts to ignore it. When it finally came time to disguise the gourd as something delicious, a simple and elegant plan formed in Christie’s brain : enter butternut squash ribs.

Prep for these badboys is deceptively simple:

That being said, the star of the show will be the sauce (pronounced sow-suh). We’d encourage you to make your own. We cheated. We got two sauces from OrganicVille; a tangy and a regular variety. This particular brand’s sauces are tasty. Tasty and gluten-free, that is.

Preheat your oven to 400ºF, and once you have properly covered the ‘ribs’ in sauce, arrange them on a baking sheet and toss them in. The objective here is to heat up the ‘ribs’ so the sauce caramelizes a bit and helps soften up the squash, as this variety is decidedly hard uncooked. So, leave it in there for a half hour or until you are satisfied with the softness as gauged by stabbing it with a fork.

Finally, enjoy dem ‘ribs’. The texture for ours was slightly chewy, but harder approaching the rind. Add more sauce as necessary, of course, and don’t be afraid to spice it up if it doesn’t meet your oral expectations.

Peace out, my vegans.